Throughout the country, local governments, business improvement districts and Main Street organizations are experimenting with ways to bring retail into older commercial districts with less of an upfront commitment from small business owners. Their tools: retail business incubators and pop-up stores. Pop-up stores use vacant building space for a day, a week, or even longer, but on a temporary basis; they bring foot traffic to the commercial district and can help business owners test the market prior to making a long-term commitment.

This is helpful because small business owners face many hurdles, particularly when starting a new venture in untested markets such as commercial districts with stagnant or declining business growth. Opening a bricks-and-mortar business is a major financial and personal commitment.

Hagerstown, Maryland provides a pop-up success story. Hagerstown launched its first pop-up store event in August 2014, held a second event during the holidays, and plans a third for this spring. Three pop-up event participants have signed leases for long-vacant space.

The events had an impact beyond the individual stores.  Volunteers and some building owners spruced up buildings and existing businesses gained greater exposure.  Overall, people are starting to think of the city center as a place to frequent for shopping, dining and other activities, and city leaders are crediting pop-up stores with contributing to the trend.

Hagerstown’s story starts with a group of long-time friends who had been getting together regularly at various city center restaurants. Among other things, they talked about Hagerstown’s downtown attractions and how to entice more people to spend time there. They formulated a plan, organized as The Downtown Movement, contacted the city’s Department of Community and Economic Development and presented Downtown Manager Andrew Sargent with a thoughtful proposal for a pop-up store event featuring multiple vendors and a consolidated marketing campaign.

Long supportive of growing and diversifying the downtown shopping options to give residents, employees and visitors more of a reason to spend time and money downtown, the city embraced the idea and rapidly became an important partner. (Hagerstown has prioritized city center revitalization in plans dating as far back as 1997 and most recently with the 2014 Community’s City Center Plan, Main Street and Arts & Entertainment designations and a variety of incentives and investments.)

Hagerstown’s experience with two successful popup events can provide guidance to other communities interested in hosting similar events. Pop-up organizers must consider a variety of details when planning such an event, from securing and preparing spaces to recruiting vendors and helping them comply with regulations. In addition, organizers must select a date (or dates) that have the potential to attract as many people as possible, prepare a realistic budget and get funding, market the event effectively and work through resident or business owner concerns.

In this blog series, we will present tips and strategies for creating successful pop-up events. The first blog focuses on securing and preparing spaces for vendors, as well as recruiting vendors and encouraging regulatory compliance. 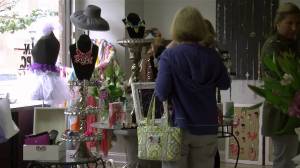 The Downtown Movement worked with Hagerstown’s economic development office to reach out to owners of buildings with vacant first floor space in decent condition and with long-term potential to house a business. Though not all property owners agreed to allow use of their buildings, many recognized the benefit of showcasing their real estate through the pop-up event.

With a good list of candidate sites in hand, the Downtown Movement inspected the spaces alongside the city’s economic development team and building inspectors. Currently in Hagerstown, the Department of Community and Economic Development houses both the Code Administration and Economic Development offices. Inter-departmental communication is strong, making it easy for the parties to work together to allow temporary use of vacant spaces to support economic development goals, while at the same time ensuring public safety.

The city’s codes staff reviewed the temporary spaces to look for hazards, to ensure there was accessibility into the space, and to make sure there were accessible toilets within a certain distance of the spaces.  Early on in the process, city staff reviewed the list of potential spaces and encouraged event organizers to use spaces that would not require significant upgrades to meet those very basic requirements.

The city also identified publicly-owned outdoor space for vendors, including University Plaza, a green space that served as the venue for an outdoor farmers and artisans market.

Naturally, building and property owners want to protect themselves from liability, so the volunteers and business owners found creative solutions to ensuring proper insurance coverage. Existing local businesses, recognizing the benefit of the event for their own bottom line, allowed vendors to use their liability insurance temporarily. City staff helped coordinate these beneficial arrangements. In one case, the city and The Downtown Movement connected a property owner who required particularly substantial requirements with a vendor who already had insurance.

Of course, The Downtown Movement also recognized the importance of making the pop-up spaces inviting. They cleaned, painted when needed and outfitted the spaces with eye-catching temporary signs and decals in the windows. Building owners also acknowledged this as a perk for their contribution of vacant space.

Both The Downtown Movement and the city’s economic development team identified and recruited vendors, though vendors also approached the organizers. For example, when the Washington County Museum of Fine Arts heard of the event, they asked to participate and ultimately set up their gift store in a pop-up right on the city’s Public Square.

Organizers required vendors to apply for space so they could keep track of participation, place vendors in appropriate spaces for their business, and create an engaging marketing and outreach campaign. They put a lot of thought into matching needs of property owners with the capacity of the tenant.

Participating vendors varied in their level of organization and sophistication. Several vendors owned established but small businesses already and had necessary registrations, tax status, permits and licenses, while others had not yet officially established their business. The City of Hagerstown informed vendors that they must abide by all applicable laws, and they offered to help – as they always do – vendors register the business, secure licenses and permits, complete tax forms and more. The city also connected vendors with other business support services, including the Service Corps of Retired Executives (SCORE), which helps people navigate the process of opening and growing a business. Ultimately, however, the city made it clear that regulatory compliance was the vendors’ responsibility.