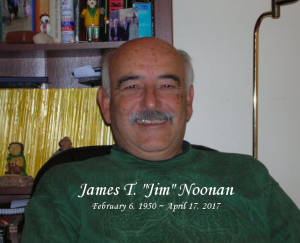 The State of Maryland has lost one of its best planners in Jim Noonan, who passed away peacefully in hospice on April 17, 2017.  Many of you know Jim not only from his long tenure at the Maryland Department of Planning (Planning) stretching back to the Nixon era, but more recently in the private sector and in various roles with the Maryland Chapter of the American Planning Association.

Born in Altoona, Pa in 1950, Jim graduated from the University of Maryland with a degree in Geography and started at what was then called the Department of State Planning. He was brought on board to help review county water and sewerage plans and amendments and with providing planning perspectives on State implementation of the newly enacted federal air, water, and waste laws.  Rising through the ranks, Jim acquired extensive knowledge and experience across a wide spectrum of land use planning areas, including transportation infrastructure, public school construction, comprehensive plan preparation, zoning and subdivision ordinances, adequate public facilities, and land conservation.  He managed the Planning’s role in the implementation of state’s smart growth initiatives, including staffing the Smart Growth Subcabinet and the Interagency Committee on School Construction.

Jim also found time to involve himself in various public policy efforts including the Inter-County Connector Principals Plus 1 Committee; the Chesapeake Bay Restoration Task Force; and the Land Growth and Stewardship Subcommittee of the Chesapeake Bay Program.  He partnered with the University of Maryland to initiate the planning commissioner’s training course. Jim became an expert in the completion of each of these endeavors, lecturing frequently at planning conferences and workshops in Maryland and beyond. Jim served as Planning’s Local assistance and Training Manager for many years, and his contributions to local planning and training in Maryland resonate in the services provided by the department to this day.

After retiring from state service in 2006, Jim assumed the duties of senior planner at KCI Technologies, working on a variety of projects but specializing in NEPA compliance.  He was named Director of Planning at Straughan Environmental until failing health became too much of a burden in January 2016. Until then he was active in a variety of executive committee positions with the Maryland Chapter of the APA.

Always a passionate planner, and answerable to no one, Jim wrote vociferously and without filter on social media, starting with the APA listserv and more recently on Facebook, lamenting at the end of March about a magnet shaped skyscraper proposed for midtown Manhattan.  Interestingly, much of his writing was private; he had two unpublished novels, and many more missives probably lost to updated versions of Word Perfect and Word.

More than anything, Jim Noonan will be remembered as a humanist.  He had your back if you worked for him, and if he worked for you he was always the professional, with an unmatched work ethic. His dedication to those he loved, the work he did, and the profession he chose was only matched by his unflappable devotion to his beloved Maryland Terrapins.  Former colleague Al Feldstein praised him thusly: “It was good. We did good.  May the memories be a blessing.”