The Maryland Department of Planning (Planning) serves as the liaison to the United States Census Bureau for the upcoming Maryland Census 2020. Planning’s goal is to make sure every person in Maryland is counted. This is the most important count for our future. All of the Planning offices throughout the state are involved in helping to get everyone counted and we are most grateful for their efforts.

Census information already informs many planning decisions; the best decisions are made with the best data available. An accurate picture of Maryland will inform representation at the federal and state level as well as funding decisions. Census results directly determine the amount of federal funding Mayland receives for a broad range of programs and services, including Medicaid, transportation, emergency services, education/schools, vaccines, and many more.

In 2010, Maryland had a 76% Census self-response rate. Although this matched the overall Census 2000 self-response rate for the state, the percentage in half of the state’s twenty-four counties either went down or stayed the same. It is important to continue every effort to improve response rates in every area. Identifying areas that have had low self-response rates and were, as a result of one factor or another, hard-to-count in the past, can help target outreach efforts in those areas.

To aid in this effort, Planning’s Data Services Division created a Maryland-specific version of the U.S Census Response Outreach Area Map (ROAM), and added customized features that allow a user to view information by Census tract. Planning has shortened the list of variables to those most predictive of low response in Maryland and these are displayed in dashboard fashion with circle graphs that frame the map. Comparing the 1400 Census tracts in Maryland will show the differences in demographics even among the low response score areas. Not all low response score areas share the same characteristics.  This permits Census outreach efforts to become more tailored in these areas.

To use the Maryland tool, select a Census tract either by typing an address into the search bar located in the upper left corner of the map (the entire Census tract in which the address is located will be selected), or by zooming in using the wheel on your mouse, then clicking on a shaded area of the map. When an area shaded dark green located in Baltimore City is selected, for example, the dashboard will automatically display the data for that area in both circle graphs and text.

The dashboard also provides data for a Census tract on total population; total number of housing units; 2010 Census self-response rate; and median household income (on the left side of the screen); as well as information related to age (percentage under age 5, and percentage 65 years and older); percentage of households below poverty level; percentage of renter occupied units; and other useful data. All of the variables can be accessed for each tract by clicking on the “Show Detailed Data” tab under the Low Response Score displayed in the upper left corner.

The advantage of the dashboard is that anyone — a local nonprofit group, community leader, pastor, elected official, or private citizen — can use the characteristics identified on the dashboard to help raise awareness of the importance of participating, and improve their community’s self-response rate in the 2020 Census.

It is estimated that for each person missed, it will cost Maryland $18,250 in lost funding over the next 10-year period. Participation is power. It is critical to get everyone counted. The most vulnerable populations can benefit the most from programs funded by Census-driven formulas. In addition to programs, important policy decisions are made based on what the Census data reflects. According to Planning Secretary Rob McCord, “The Census is like a family portrait that we take every ten years, we need it to show what Maryland really looks like. We need everyone in the picture.” 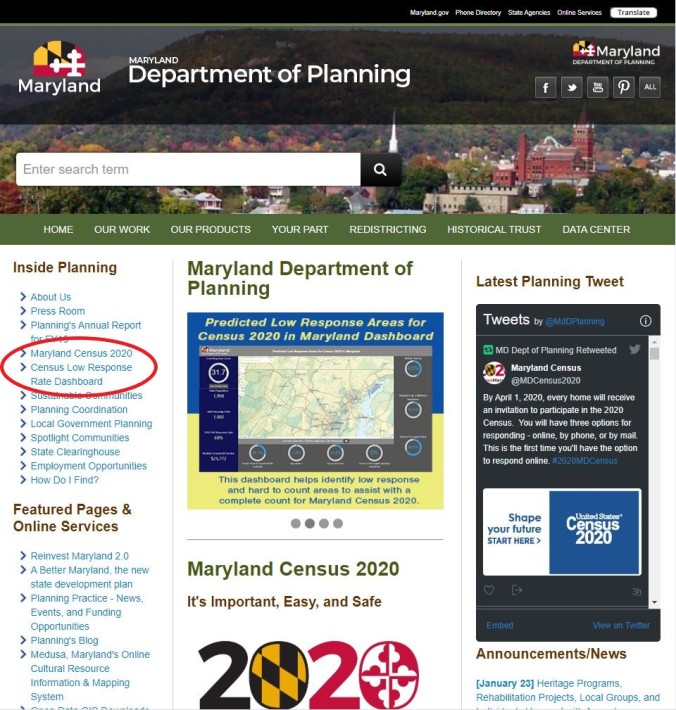 Toward that end, beginning mid-March 2020, everyone living in Maryland will be able to fill out their Census forms online for the first time. Individuals will still have the option of filling out a paper Census form which will arrive in the mail in April, or if they prefer they may provide their responses by phone (also an option available for the first time). To learn more about the safe, secure and private 2020 Census or the Census Low Response Rate Dashboard, visit Planning’s website and select the appropriate hyperlink on the left side of the screen (as shown in the screenshot above).