For the first time, respondents to the U.S. Census can complete their Census survey online, by telephone, or the more traditional way, by U.S. Mail. And for the first time, anyone  — from planners, politicians and teachers, health care advocates and private citizens — wanting to see the results as they unfold, can do so online.

The U.S. Census Bureau is tracking self-responses and publishing the data on a user-friendly interactive map. On the map, users can select a particular geography (by state, county, city, or specific census tract) and view the daily self-response rates. The rates are grouped by whether they were submitted via internet or via phone and mail submissions (these can be selected via a drop-down menu if desired, otherwise the default is All.)

Using the state drop down menu to select Maryland, a user will see a map of Maryland, its counties and Baltimore City: 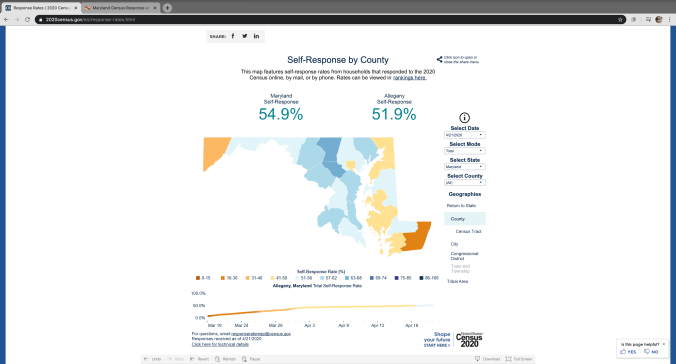 Highlighting County then selecting Baltimore, a user will see a map of Baltimore County and it’s numerous Census Tracts (CTs):

Similarly, a user can select an individual CT to view its response rates, and can also look at results by municipality, or congressional district.

The U.S. Census Bureau has also created a feature where users can download the self-response data directly from their website for use in their own programs (on the website select the download icon directly beneath the map on the right hand side or scroll down slightly for additional options).

Planning is using this feature to create a customized chart, entitled Maryland’s Census Response at a Glance, which shows the self-response rates for Maryland’s jurisdictions—all twenty-three Maryland counties and Baltimore City. The chart is updated with the latest Census data available daily at 3:00 PM EDT.

To view data for an individual county, users can hover over the colored bar representing the county and a pop-up menu will be displayed, as seen for Frederick County, below:

Finally, Planning is creating customized reports for all 24 jurisdictions to identify the lowest responding Census Tracts within each county. The number of responses is compared to the number of people living (and the number of households existing) in the CTs to reveal the number of people/households that have yet to respond. These reports are sent to the Complete Count Committees in each county and Baltimore City so they can target outreach to these communities, encouraging them to fill out and submit their Census surveys.

For more information about the data presented in the U.S. Census dashboard and Planning’s Response at a Glance charts, please contact Al Sundara, Manager, Projections, and State Data Center at: alfred.sundara@maryland.gov.