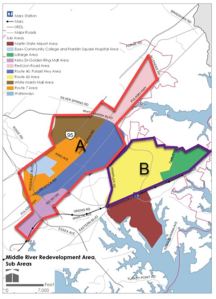 Maryland Department of Planning (Planning) Assistant Secretary of Planning Services  Val Lazdins was recently invited to participate on a review panel for a land use planning course (URSP-603) at the University of Maryland (UMD), College Park, Urban Studies and Planning Program. Planning staff member, Kristen Humphrey, was similarly invited to attend an end of semester “super jury” at Morgan State University’s (MSU’s) Center for the Built Environment & Infrastructure Studies (BEIS). For Secretary and staff alike, learning about the work students from both programs are engaged in, and the planning solutions they propose for the urban and suburban challenges of the region, was illuminating .

The project study area focused on  a section of Pulaski Highway/Route 40 and Route 7 in the Middle River community in eastern Baltimore County. The county wishes to target new development and redevelopment into existing commercial corridors, which may be underdeveloped and could benefit from higher- density land uses. The Baltimore County Master Plan 2020 promotes residential and commercial development along the Route40/Route 7 corridors. Recognizing its potential for further economic development, proximity to existing services, and responding to a regional need for housing, the county is prepared to transform this area.

The student teams focused on different sub-areas within the corridor and accordingly developed distinct recommendations.  One team focused on the possibility of transit-oriented development around the West Cold Spring Metro station. Another team planned for higher-density residential and mixed-use development adjacent to existing single-family housing. This team also considered commercial development near the White Marsh Town Center Mall and existing institutional uses at Franklin Square Hospital and the Community of College Baltimore County (CCBC) Essex campuses. Additionally, a team concentrated on creating programmatic and design solutions along the Route 7 corridor to support aging in place for the area’s senior population, such as providing a circulator bus route and walkable streetscapes. The hypothetical exercise gave students a chance to address large-scale planning challenges in a manageable but diverse corridor context, specifically a situation in which both greenfields (undeveloped land) and greyfields (developed but economically outdated land, such as old strip shopping centers) exist.

While hypothetical, it is not implausible. The course project design ​demanded land use planning skills that cannot be applied in the abstract;  emphasizing learning through doing. Thus, it was an essential vehicle for applying insights learned in class discussions and the assigned readings.

About the students’ performance, Assistant Secretary Lazdins says, “I was impressed with the quality of student work, the thoughtful approaches to complex issues and their excellent presentation skills. Things have come a long way since I was in grad school. Applying computer technology and GIS tools makes expressing design ideas so much easier to understand.”  Returning to her alma mater for the first time in several years for the fall super jury at Morgan State University’s Center for the Built Environment & Infrastructure Studies (BEIS) was an illuminating and heartening experience for Planning staff member, Kristen Humphrey. Two classes in the School of Architecture and Planning (SA+P)  presented their final projects for the semester that evening. First, Urban Real Estate: Real Estate Development, Finance, and Sustainability; and, second, a combined graduate/undergraduate and planning/architecture studio class (taught in tandem), collectively entitled Studio II: Park Heights REconnected.

The Urban Real Estate class was tasked with selecting a site in Baltimore City for a development project and incorporating all of the concepts they learned in their Intro to RE-development class. Two students, Eric Johnson and Khalia Young, presented their concept for redeveloping the vacant, former Morris Mechanic Theater site in downtown Baltimore. The site has been the subject of several failed proposals and a stalled development plan since the theater was demolished in 2014.

The students chose the site for its proximity to downtown tourist attractions, arts centers, commerce centers, and, most importantly, transit. They conducted a market analysis and feasibility study, which included a review of both the successful and unsuccessful features of the adjacent Harbor Place, and projected income and expenses for the proposal over 20 years.

The  final proposal created a transit-oriented development (TOD) mixed-use residential/commercial space with artists’ studios and exhibition space that engages the community at street level with primarily entertainment, dining, and retail elements. In addition to transit access, their concept addressed sustainability with features such as a glare-reducing building “shell” and a green roof.

As part of the assignment, they worked with the Baltimore City Department of Planning, community groups such as the Towanda Neighborhood Association, Park Heights Renaissance, and other stakeholders to revitalize Park Heights’ neighborhoods. They conducted site visits and held three community engagement meetings to gather information for proposed design interventions. In May and September 2019, they presented their projects to the community for feedback.

During the Studio II in fall 2019, a new cohort of SA+P student groups further developed strategies to reconnect Park Heights to the City of Baltimore in partnership with the Towanda Neighborhood Association. Eight graduate students from the planning studio (CREP520) and six undergraduate students from an elective architecture class (ARCH418) compiled the feedback from focus groups conducted in September on the spring 2019 projects; performed case studies and site analyses; and selected and proposed interventions at three strategic sites.

They identified these sites as: Park Heights Avenue: A Better Boulevard, located toward the northern end of the Park Heights corridor; West Cold Spring Transit Oriented Development (TOD), located at the existing Cold Spring Lane Metro A station to the west of Park Heights Avenue; and The Heights at Pimlico, located at the southern end of the corridor at the existing Pimlico race track in northwest Baltimore — the storied but beleaguered home of the famous Preakness Stakes. The students divided into three teams to develop plans and strategies for reconnecting the Park Heights area to the City of Baltimore.

Some of their proposed interventions, to be implemented in stages, included:

All of the student presentations at both institutions were thorough in their fresh, creative takes on, in some cases, very challenging and long-standing development issues in the area. In particular, we found their research and work with their community clients impressive in its depth, while their presentations were well organized and thoughtfully delivered. We at Planning look forward to the opportunity to see more inspired projects at future super juries and project reviews at both Morgan and College Park. Kudos to both schools!